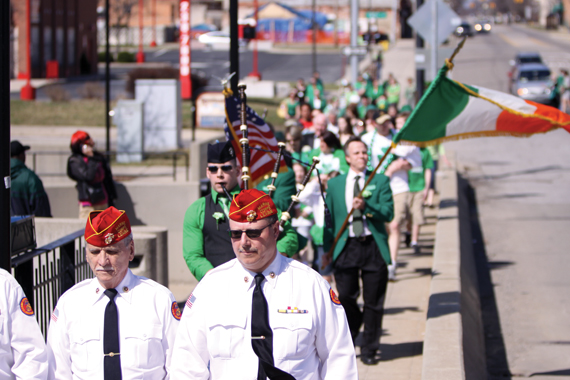 St. Patrick’s Day is all about drinking, kissing and wearing the color green, right? Wrong!

“Most people gravely misunderstand the significance of the day and the symbols that accompany it, such as parades, the color green, and bagpipes,” says Bill Cavanaugh of the Ancient Order of Hibernians. “When my great-grandfather came to America, there were still penal laws in effect in Ireland. You could be shot on site for wearing green, which was the color of Irish nationalism.” Bill went on to say that bagpipes were outlawed as well, and playing them was punishable by death. Prohibition of bagpipes, was due to the fact that these pipes were used in ancient times during battle to coordinate troops. As for parades, Irishmen were forbidden from gathering in groups greater than three, so parades were completely out of the question, even on St. Patrick’s Day, which was one of the most sacred days of the year for native Irishmen. When millions of Irish immigrated to America, forced to flee from persecution and famine, parades were held in defiance of the oppression in their home countries and in celebration of the freedoms found in the new world. St. Patrick’s Day became a de facto Irish Independence Day. “We carry on that tradition to this day,” said Bill. This year, the parade begins at 1pm and the Pot O’ Gold Four-Mile event begins at 5:30pm.